I don’t have time for a real blog post, but here’s a quickie in an attempt to keep this blog alive.

Dave Altig and Mike Bryan of the Atlanta Fed’s Macroblog argue here that it wouldn’t make much difference if the Fed were doing price level targeting (in which the future target path stays fixed even when you miss a target, so you need catch-up inflation or catch-up disinflation) rather than inflation targeting.  Their evidence is mostly from a chart like this (my replication using monthly data, which you can confirm looks fairly similar to theirs which appears to use annual data): 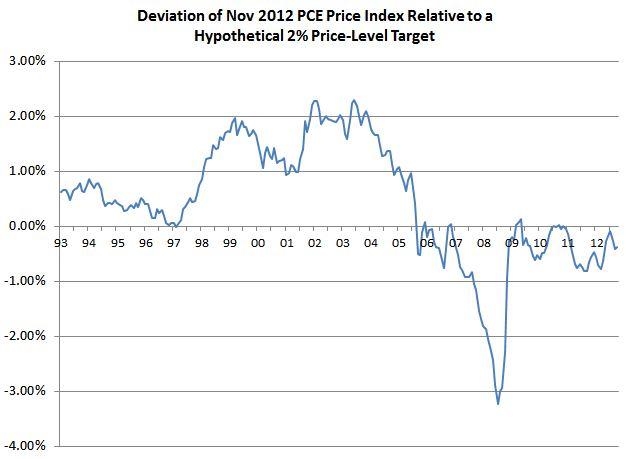 By what percent would the actual level of the personal consumption expenditure price index differ from a price-level target that grew by 2 percent per year beginning in 1993?

The succeeding points in the chart answer that same question for the years 1994 through 2009.

OK, fine.  So here it looks like a price level target would have produced roughly the same results as the Fed’s (unofficial until January 2012) inflation target, and whether it would have undershot or overshot depends on when you start the target path.  In particular, people who argue that we are undershooting right now don’t seem to have much of an argument unless they start the target path in 2008 or later.

The problem with this chart is that it uses the headline PCE price index, whereas during most of this time (until January 2012 when the official inflation targeting policy was introduced), the Fed was perceived to be targeting core PCE inflation (excluding food and energy, that is), not headline inflation.  Price-setters were making their decisions largely under that assumption.  It makes no sense to go back to 1993 and set up a target path using the headline price index when that index was irrelevant to the policy that the Fed seemed to be following at the time.

Moreover, targeting the price level using the headline price index is a bad idea anyhow.   If you're going to use a price level target (and I do think it would be better than an inflation target), then you don't want to use a price index that will be subject to shocks that are volatile but persistent. A one-time increase in the price of oil should not require a subsequent compensating decline in other prices to offset it (nor should a one-time decrease in the price of oil require a subsequent burst of inflation to offset it). Theoretical arguments would suggest using an index of sticky prices, but the core is a reasonable approximation.

Here’s what my chart above looks like when you use the core PCE price index instead of the headline index. 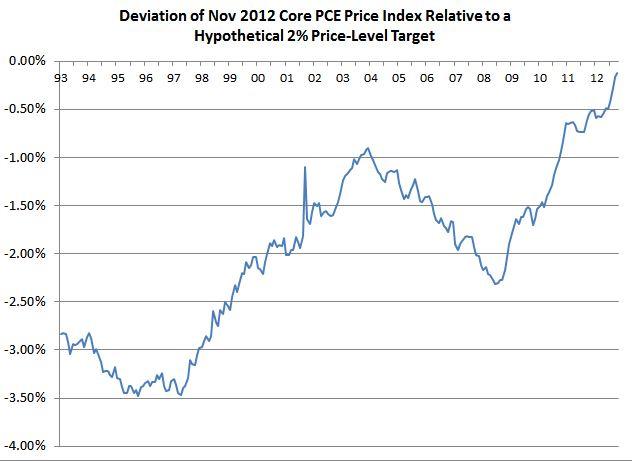 Very different.  By this measure we are undershooting now no matter when you start the target path.  And unless you cherry-pick the starting point in 2003 or 2011, the size of the undershoot is not insignificant.  If you compare to the 1990’s, the Fed was already slightly behind when the Great Recession began, and they have fallen further and further behind since then.  Price level targeting, using the core price index, would require the Fed to promise a significant amount of catch-up inflation in the coming years.

DISCLOSURE: Through my investment and management role in a Treasury directional pooled investment vehicle and through my role as Chief Economist at Atlantic Asset Management, which generally manages fixed income portfolios for its clients, I have direct or indirect interests in various fixed income instruments, which may be impacted by the issues discussed herein. The views expressed herein are entirely my own opinions and may not represent the views of Atlantic Asset Management. This article should not be construed as investment advice, and is not an offer to participate in any investment strategy or product.
Posted by Andy Harless at 2:23 PM 461 comments: