Record Job Openings Not As Impressive As It Sounds

The most important qualification is that the data only go back to December 2000.  If you were paying attention at the time, you remember that the dotcom bubble had already burst, and the US economy was heading into a recession.  And the subsequent housing boom wasn't really a broad hiring boom, so the JOLTS data don't give us an appropriate comparison for record job openings.

The second qualification is that the US economy has gotten larger over time, and the raw number of job openings largely reflects this scale increase rather than a boom in hiring.  The job openings rate is 4%, which is high for the series but has already been hit twice (July 2015 and July 2016).

The third qualification is that the jump in job openings in April was mostly in hotel and restaurant businesses, so it isn't a broad-based increase.

To put April's report in perspective, I estimated the job openings rate going back to 1951.  Prior to 1997, the estimates are based on the Conference Board's newspaper Help Wanted Index, normalized by total non-farm payrolls.  From 1997 to 2000, I adjusted the Help Wanted Index to reflect the increasing market share of online job advertising.  And I linked these data with the JOLTS data (which I use since December 2000) to allow interpreting the earlier data in terms of job openings rate. 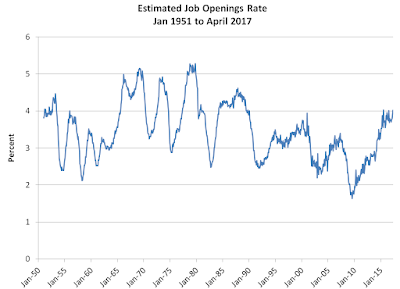 From this chart it looks like today's 4% is historically typical.  Others may link the data differently and have somewhat different results, but in any case we're not in an unprecedented job opening boom.
Posted by Andy Harless at 1:00 PM 348 comments: