Job Losses Are Not the Problem

It is sometimes argued that recessions benefit the economy by allowing the destruction of old, inefficient economic structures so that newer, better ones can be created to replace them. On the surface, this story might seem to apply to the recent recession: ostensibly, a lot of useless jobs in finance, real estate, and construction were destroyed, as well as perhaps old manufacturing jobs that hadn’t caught up with the latest technology, and jobs in retail trade that needed to be replaced by the Internet, and so on. But there’s one problem with that point of view: overall (at least during the first four quarters of the recession, up through the end of 2008, for which we have the relevant data), there weren’t an unusually large number of total jobs being destroyed.

But...but...but...haven’t we been hearing about large numbers of job losses month after month since the recession began? Sort of. We’ve been hearing about large numbers of net job losses. That is, the number of jobs that have been lost has been a lot more than the number that have been created. And a lot of job losers have ended up collecting unemployment insurance for a long time, sending the figures for continuing claims up to records, instead of getting new jobs. But the gross number of jobs being destroyed has not been unusually large. In fact, relative to the overall level of employment, job destruction was happening at a faster rate during the boom of the late 1990s than it was during the last quarter of 2008.

How can that be? For one thing, when you take out the business cycle, there seems to have been a general downward trend in the rate of job destruction over the past 10 years. More important, the rate of job creation also had a downward trend, and it dropped to new lows during the recession of 2008. If you lost a job in 1999, you weren’t actually all that atypical, but it wasn’t a big problem, because typically, you could find a new job fairly easily. If you lost a job in 2008, you were (typically) out of luck. 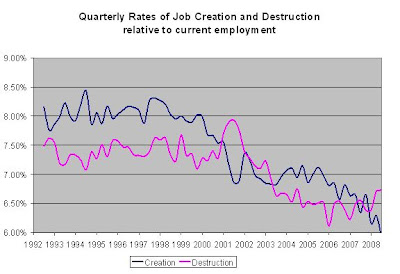 The fact is, job creation and job destruction take place during booms at rates that are not dramatically different from the rates during recessions. It’s just the difference between the two that changes. In a typical boom quarter, about 7 million jobs are destroyed, and about 8 million are created. In a typical recession quarter, about 8 million are destroyed and about 7 million are created. There just isn’t much support for the idea that recessions give us a special ability to reallocate resources more intensely than we do during a boom or a period of normal growth. “Creative destruction” is a dynamic process that continues all the time, not one that occurs in separate phases of creation and destruction.

And the most salient feature of the current episode is that there has been unusually little creation. From the 1990’s to the 2000’s, the quarterly job creation rate fell from about 8% to about 7%. Since 2006, it has fallen to about 6%.

Some might argue that this type of slowdown in job creation is inevitable during times of structural change and that it is useless to try to oppose it with monetary and fiscal policy. It takes a long time (Arnold Kling, for example, would argue) for the economy to come up with ideas for new, productive uses of resources when the old uses are no longer productive. Monetary and fiscal policies can’t do much to speed up this process. They can’t make entrepreneurs more creative.

I’m skeptical of that view: entrepreneurs were plenty creative during the 90’s, once the booming stock market gave them a reason to apply their creativity. Monetary policy really did help speed up the process of finding new uses for resources: low interest rates led to high equity prices, which made it easy to raise capital and thereby made it advantageous to find new ways of using capital. Some would say the process went too fast in the end, with a large fraction of the uses proving ultimately unproductive, but statistics show aggregate productivity rising rapidly and continuing to rise during the subsequent years, even (atypically) during the recession that immediately followed the boom. There may have been a lot of froth, but there was plenty of good beer underneath, and monetary policy is what opened the tap.

In any case, even if I were to concede that monetary and fiscal policies don’t help speed up the adjustment process, they do help us get the most out of the economy in the mean time. With nearly 10 percent of the labor force unemployed, there are a lot of resources being wasted – people spending their time looking for jobs that many of them just aren’t going to find until we get a lot more economic activity. There are plenty of useful things that those people could be doing in the mean time.

Perhaps more important, monetary and fiscal policies help us reduce the risk that a weak economy – too weak for too long – will fall into a deflationary spiral. As long as job creation remains weak, employers have little incentive to raise wages, and competition will tend to push down prices. Even an “artificial” stimulus, one that doesn’t accelerate the structural adjustment process, will create a demand for labor and force employers to compete somewhat for workers. That competition, in turn, will prevent them from competing too aggressively in product markets and keep prices reasonably stable.

There is, of course (in theory, at least), the risk that policies will go too far and not just prevent deflation but produce excessive inflation. As I have argued before, we are nowhere near that point right now. I made the case against inflation using mostly the unemployment rate, but the case becomes even stronger when you consider the job creation statistics. This unemployment is specifically being induced by a slowdown in job creation. Job creation is specifically what leads to inflation: it’s when companies want to hire aggressively that they start raising wages excessively and competition becomes unable to keep prices in check. If unemployment – which arguably has a more tenuous relationship to inflation – is far, far away from the danger point, job creation – which has a direct relationship to inflation – is even further away.


DISCLOSURE: Through my investment and management role in a Treasury directional pooled investment vehicle and through my role as Chief Economist at Atlantic Asset Management, which generally manages fixed income portfolios for its clients, I have direct or indirect interests in various fixed income instruments, which may be impacted by the issues discussed herein. The views expressed herein are entirely my own opinions and may not represent the views of Atlantic Asset Management.